This Addohms Brushed DC Motor Tutorial goes into the third dimension! Using a variety of 3D models, we show you what makes a brushed DC motor, a brushed DC motor. Then, like usual, we break two simple ways to control them with a microcontroller like the Arduino. You can use a single BJT Transistor (remember those from #10?), build your own H-Bridge, or use a popular H-Bridge chip.

This is the first AddOhms Tutorial to make use of 3D Models. There were two different models used in this episode. In the beginning, the simple DC model is from an Artist on GrabCAD, link below. (I had to edit the model a bit, but the core work was his.)

The rest of the video (with the brushes and commutator) was licensed from TurboSquid. 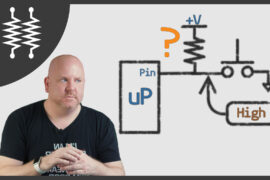 2016-02-28
Like other websites, this one uses cookies to remember things. Mostly, I use Google Analytics to know how many people come here.¯\_(ツ)_/¯
By clicking “Accept”, you consent to the use of ALL the cookies.
.
Cookie SettingsAccept
Manage consent